Please see the below invite to the LSBA AGM 2020, which will take place on Tuesday 21st July 2020 from 7.30pm to 9.30pm. This will be an online meeting using a suitable platform, with connection details issued by 20th July 2020.

Team Leicestershire juniors Tom Cowperthwaite and Hritika Modi were competing in this yearly event for the 3rd time and were joined for the 2017 event on September 3rd by Issy Paterson-Watts and Hritika’s dad Vish! The Friendship Challenge was established in memory of Jonathan, who was a keen badminton player and coach who died tragically in a car accident. The tournament is now part of a programme of events to raise funds to promote badminton and encourage more young people into the sport.

This year’s event attracted a number of mixed teams from Coventry, Birmingham, Leicester and Stratford and included a variety of age groups. After a fantastic day’s competition against some very experienced players, “Team Foxes” collected the trophy as the well-deserved winners! 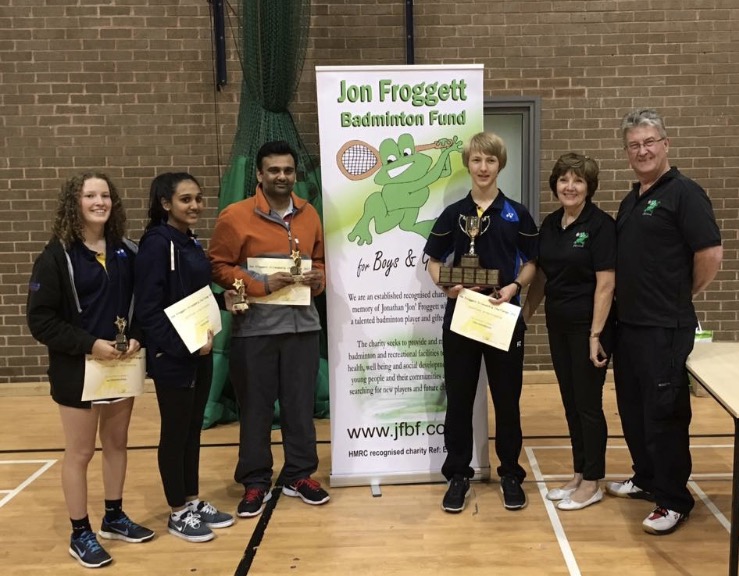 After a hugely successful season for Leicestershire junior badminton at all ages during 2016/17, many of the players and parents attended the annual Leicestershire Schools Badminton Association presentation night to celebrate their achievements.

Held for the second year at Hugglescote Social Club, the event featured a fantastic buffet and disco as well as a raffle, compered once again by Mitch Dale – thanks to the effort of the Social Committee of Alaina, Nat and Liz – and a great night was had by all!

However the main order of business was the presentation itself. Team Managers for each of the age groups – Adam Sewell & Karen Stevenson (U12), Amie Hoult (U14), Alaina Goodenough (U16) and Laura Cowperthwaite (U18) – were invited to the stage to present certificates and county colours to all eligible players and provide the audience with an overview of each team’s successes throughout the season.

This year’s winners of the county championships were presented with their trophies, with particular congratulations reserved for Luke Hoult and Sophie Watson at U14,  Jess Allen at U16 and Eve Dale at U18 for the clean sweep across all 3 events. A special presentation was also made by Amie to her victorious U14’s for coming out on top in the Shires League for 2016/17 – the first time any Leicestershire team has managed this feat!

As usual, ICT Team Manager Chris Hall took to the mic to regale the audience with tales from this year’s tournament which saw the Leicestershire team fight hard to finish a creditable 15th place. Chris also presented the two ICT awards, the Forest Cup for Outstanding Player of the event which was won by Jai Chandarana and the Players’ Player trophy which was awarded this year to Izzy Pike.

This year’s winners of the Cooper Cup and Ray Liggins Trophy, Carly Stevenson and Tom Platzer, were also presented with their trophies.

Last but not least, 3 special trophies presented annually by the LSBA committee. The Hutchinson Trophy is awarded to a player who has contributed commitment to the sport and this year’s winner was Issy Paterson-Watts. The Appleton Trophy is awarded to the most outstanding player of the season which was awarded for this year to Jai Chandarana.

Finally, the Colin Kent award is presented to someone who the committee decides has given outstanding service to Leicestershire Schools’ Badminton and this year’s winner was Terry Talbot. Terry has been coaching for the LSBA on Saturdays for over 15 years as well as running weekly sessions at both Measham and Hood Park Leisure Centres, encouraging grass roots players into the sport. He also helps to run the non-county tournaments and has been an LSBA committee member for many years, sharing his knowledge and experience with others.

With the presentation wrapped up it was time for the players and parents to relax and enjoy the rest of the evening – what a great way to celebrate an amazing season for Leicestershire junior badminton!

On Tuesday January 17th, the 2016 Men’s Badminton Doubles Olympic Bronze Medallists Marcus Ellis and Chris Langridge visited the home of Leicestershire badminton at Babington Community College for an evening of exhibition matches and on-court participation alongside some of the county’s top junior talent.

Young players whose ages ranged from 8 through to 18 watched the duo take on former Olympian and current Team Leicestershire Performance Director Anthony Clark in a thrilling exhibition match, showcasing the skill, speed and stamina needed to become a world-class badminton player. All the youngsters then had the chance to step on court and play Ellis & Langridge themselves, an amazing opportunity to pit their developing talents against the Olympic medallists – there was much excitement whenever a point was won against them!

The evening concluded with a Q & A session led by Anthony Clark, giving the juniors a chance to grill the pair and pick up tips and expert advice as well as discussing the recent decision taken by UK Sport to remove every penny of funding from badminton’s future Olympic programme, despite the incredible successes of the UK badminton team at the Rio Games last year. Marcus and Chris are part of Badminton England’s campaign to have this decision reviewed and all the players and their families were urged to support these efforts by signing an online petition. 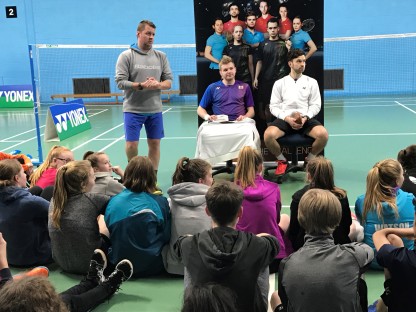 One of Team Leics youngest players, Matilda Sherwin aged 8,  summed up what she thought of the event: “It was amazing to meet the players in person and see how fast and strong they are. I’m doing bleep tests at school and now I know they can score up to 16 I’m going to train hard and beat it!”

The evening concluded with a chance to get racket bags signed and have photos taken with their heroes and their Olympic medals – an evening these young sports men and women will never forget! 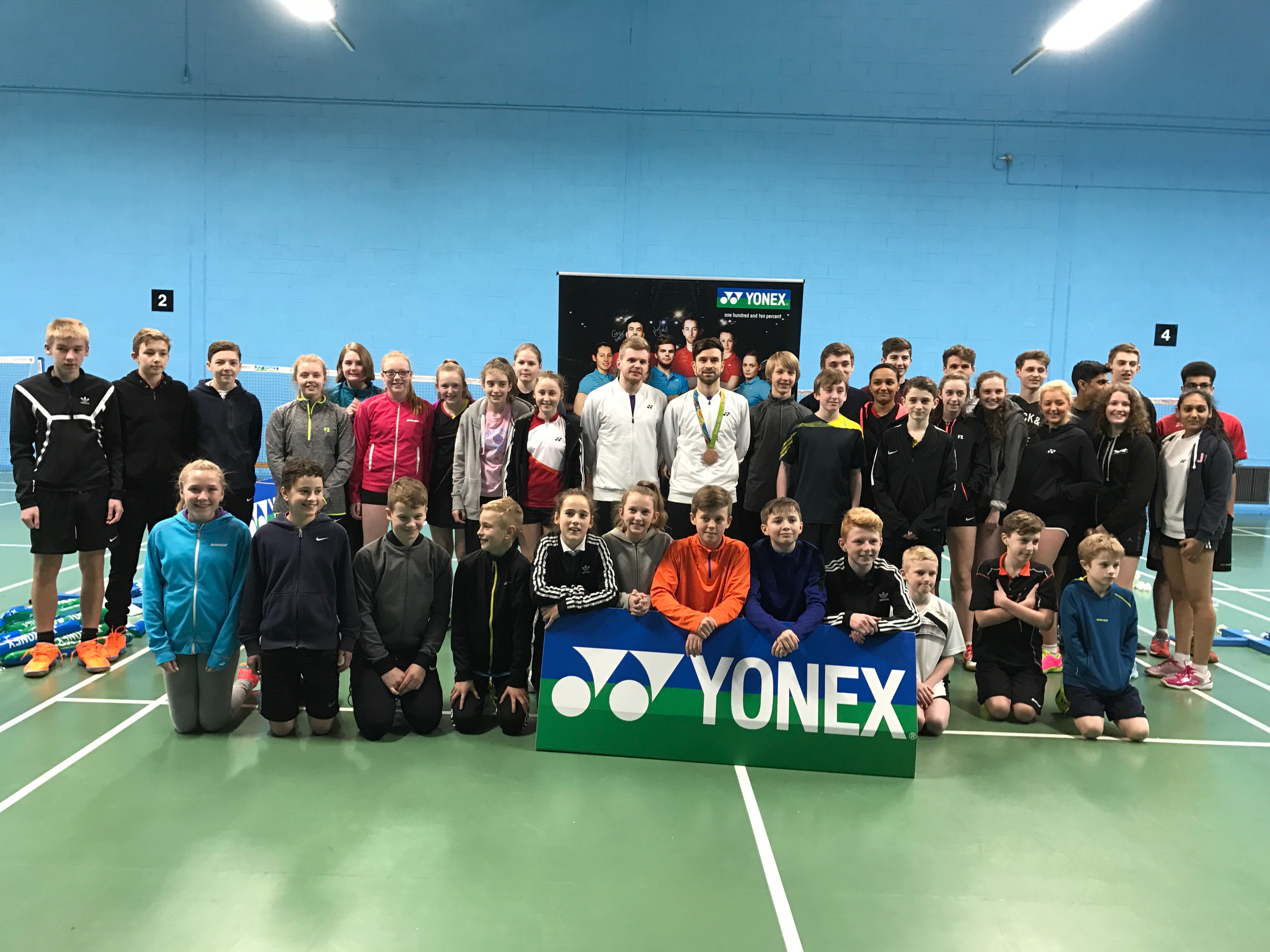 Friday 1st July saw the great and the good of Leicestershire’s junior badminton talent gather with their families to celebrate another fantastic season. This year saw a change of venue with the event being held at Hugglescote Social Club.

As well as the Team Managers’ speeches informing how their teams had fared in the year gone by, players were presented with certificates and county colours. The presentation evening also sees the annual awarding of a number of special trophies including:-

The Appleton Trophy which is presented by the Appleton family in the name of their son Garrick who was tragically killed in a motorcycle accident a number of years ago and it is to be awarded to “The Most Outstanding Player of the Season” as decided by the committee. This year the award was given to Zoe King.

The Colin Kent Trophy is to be presented to someone who the committee had decided had given “Outstanding Service to Leicestershire Schools Badminton”. This year the trophy was awarded to Neil Cooper who is stepping down from the coaching team after many years’ service to Leicestershire’s young badminton players.

With the serious business completed, it was time for the players to relax and enjoy the rest of the evening. The newly formed social committee of Natalie, Liz and Alaina had organised a fantastic spread and raffle, which was ably compered by Mitch Dale. But the highlight of the evening was the live band, featuring our very own Ben Pullen and Dan Youngs both of whom swapped their badminton rackets for guitars for the evening. As their Team Manager Laura commented “I understand now why Dan has his hair long, I’m always tempted to take him a hair band to matches!!!” 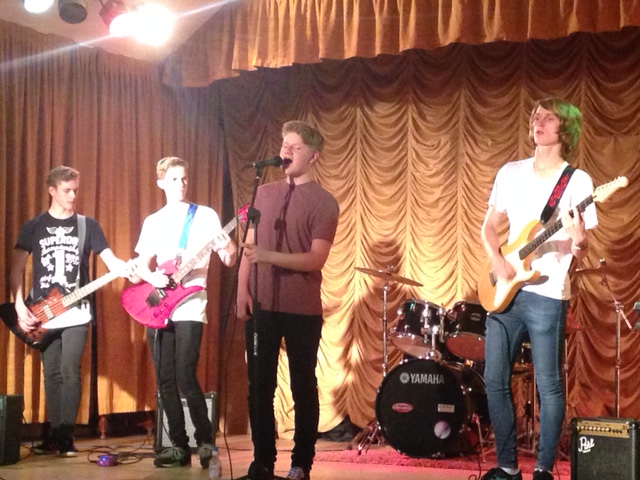 A great evening was enjoyed by all and it was a fitting end to another successful year for Leicestershire’s junior badminton.