Leicestershire fielded several players any the recent U15 Silver event played in Sheffield at the Concord Sports Centre with Danny Beynon and Tom Paterson-Watts pairing up for the boys and Evie Pike and Grace Sherwin representing the girls.

Although none of the players managed a medal in the singles, both Tom and Danny won their respective groups before being knocked out by the eventual winner and the top seed respectively. They teamed up to replicate this achievement in the doubles to guarantee a medal, again being unlucky to face the eventual gold medal winners in their semi-final to take the bronze on this occasion.

In the mixed doubles, Grace paired with regular Lancashire partner Akshay who was already celebrating double gold in the singles and level doubles and looking to make it 3 from 3! Things went to plan with Grak & Ak winning their group easily before facing local Yorkshire pair Lucy Fowler & John Lowe, coming back after losing the first game to win the next to 8 and 6. On to the final and the Leics/Lancs pair faced Katherine Arksey & Russell Yeng who proved too strong on this occasion, so it was a silver medal this time for Grace! 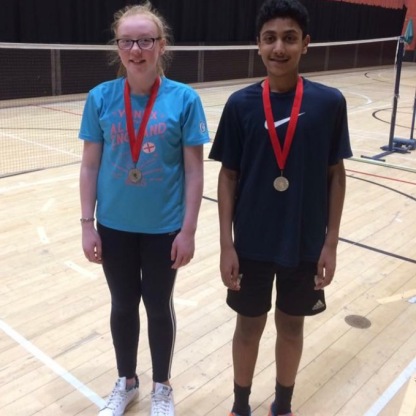