Skip to content
21st and 22nd of January 2017 saw the return of Leicestershire to the prestigious guest list for the York RIO (Railway Institute Open) tournament after being absent for a number of years. With great excitement, and very short notice, a team was assembled and the invitation was accepted much to the delight of John Foster, the tournament organiser. The RIO tournament, fondly known as a ‘mini ICT’, is held over a weekend with all the teams and managers housed for the duration in the Wheatlands Lodge, York.
On Saturday all the teams arrived at the railway institute, there was an introduction and welcome by John Foster and the tournament got underway!
Leicestershire’s first match of the tournament was against Yorkshire! This was a close match with the girls dominating the wins. Leics were 2-1 up after the mixed, Ryan and Eve, Harry and Izzy securing straight set wins. No wins for the boys in the singles, Yorks proving to be too strong, but the girls brought us back into the lead 5-4 with Hritika, Issy and Jess winning all theirs. After the boys doubles the match was all square 6-6, Sameer and Harry took a straight set win against the third pair while Tom and Nikhil, Martin and Ryan lost in close deciding games.  Yorks pushed into the lead after Eve and Hritika lost in the deciding game against the Yorks top girls pair. Ella and Issy went on to win their match making it all square again which left it down to Jess and Izzy to play the deciding rubber for the match……they won it in style in two straight games!
First win of the tournament against the hosts 8-7………….it was at this point that Leics were told they were going to be ‘barred’ again!!
On a high after the win we then came up against a very strong Surrey side. A team talk by manager Chris and new partnerships announced for this tough match! First up was the mixed, usually our strongest event, however, Tom and Ella fought hard but were overwhelmed by a very strong pair, Martin and Jess put up a good fight but lost in the deciding game against their opponents, Ryan and Eve managed a win in the deciding game against the third pair, giving the team some hope!! Next the boys singles, Nikhil, Sameer and Harry all worked hard but the Surrey boys proved to be too strong. Hritika, Issy and Izzy also had hard games but were unable to overcome their opponents. Surrey had won the match by this time having taken 8 rubbers already but undaunted the team rose to the occasion and played their best, Eve and Jess managed to take one game in their match but lost in the decider. Surrey 14 Leicestershire 1.
Another team talk and new pairings again for our final match of the first day against Hertfordshire. Ryan and Ella took on the first pair and very nearly took the first game 16-18 but were unable to secure a win this time. Martin and Jess, Harry and Izzy also lost their matches against tough opponents. Next up the boys singles, Tom in the top spot, played hard, had a close first game but lost in two, Nikhil won in straight games and Sameer won his in a close fought match winning in the deciding game. Herts were 4-2 up at this point. Girls singles next, Hritika in the top spot came up against a strong opponent and lost in two games, Eve faced their number two girl and won hers in a tight deciding game, Izzy also played a three setter but was beaten in the decider. The match stood at 6-3 to Herts going into the level doubles. Tom and Martin paired up against their number one pair but were beaten in two, Nikhil and Ryan won theirs in the deciding game….now 7-4 to Herts….next up Harry and Sameer took on their third pair, first game went to setting but was lost 19-21, so close, they still fought hard in the second game but lost 12-15. Match was now 8-4 to Herts. Eve and Ella paired up against the first pair but lost in two sets, Hritika and Issy only just lost to their opponents both games 15-17! Jess and Izzy won in straight sets….final score Hertfordshire 10 Leicestershire 5.
After a long day it was back to the hotel for showers, food and an evening of dancing for young and old, some drinking and lots of socialising!!

Sunday morning, after not much sleep ,it was back to the Railway Institute for the next group matches to determine the final positions for the tournament.
Leicestershire were in the second group playing for position 5-8 along with Yorkshire, Lothian and Nottinghamshire. Having already played Yorkshire in the first round we just had two matches to play against Lothian and Nottinghamshire.
We had a great start against Lothian, Martin and Ella, Ryan and Eve winning their mixed, the third mixed was conceded as the Lothian team were short of girls! Tom and Nikhil lost their singles but Sameer came up the rear winning his in style in two straight games against their third boy. Hritika and Issy battled hard but lost theirs and again Lothian had to concede their third as they didn’t have enough girls. Onto the boys doubles….Tom and Martin, Ryan and Nikhil, Harry and Sameer were all triumphant giving Leics enough wins to win the match! Only two girls doubles were played which went Lothian’s way, one conceded,. Final score Leicestershire 9 Lothian 6.
Final match was a local derby against Nottinghamshire, playing for fifth place. We had a great start with Martin and Ella, Ryan and Eve, Harry and Jess winning all their matches in straight sets. Tom stepped up to play their number one boy but he proved to be too strong in the end, although Tom took early leads in both games. Nikhil won his in a thrilling close match, Sameer did the same in three games. Leics 5 Notts 1…..Time for the girls to step up. All three girls, Hritika, Issy and Izzy had close three setters with young Izzy winning hers in the deciding game….Leics 6 Notts 3. Up next was the boys doubles…. Tom and Martin had a close match against the Notts first pair, as did Ryan and Nikhil, Harry and Sameer took theirs to three but just lost out in the decider….the match was all square at 6-6! Up next the girls doubles, Hritika and Ella lost, Eve and Jess won! 7-7….it was all down to the Iszy Duo to retain the honour of the local derby….first game was a close loss 12-15 but they rallied and took the next two games in style to win both 15-7! Final score Leicestershire 8 Nottinghamshire 7.
5th place for Leicestershire. All players received  engraved medals to mark the occasion. Leicestershire won a special award for making the tournament with a full team at very short notice! Martin, Eve, Tom, Ella, Ryan, Nikhil and Issy were all nominated for sportsmanship awards with Eve winning the girls best sportsmanship trophy! 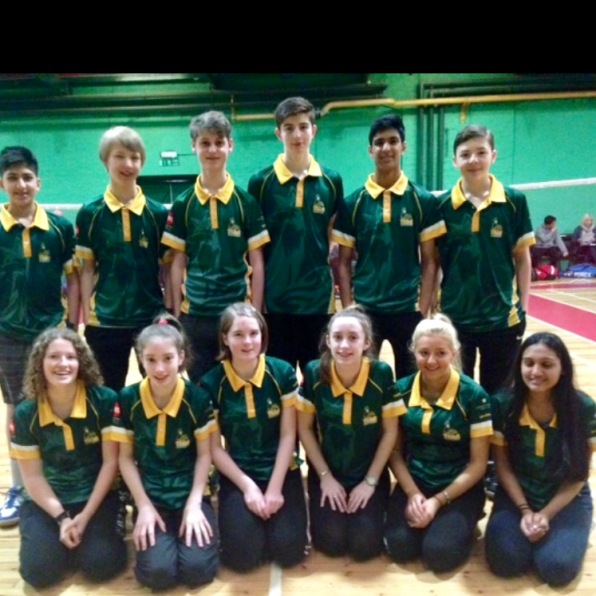