Saturday 7th January: the first weekend’s competition back after Xmas and a staggering 11 U15 players showed their commitment by travelling up to the Railway Institute in York for the U15 Silver event.

In a dominant display, Team Leics brought home 7 of the 20 medals available on the day!

Although Danny and Luke played well to reach the quarter finals, they weren’t able to progress further into the medals. In the girls event, both Eve and Jess made it through to the semi finals where they faced local girls Lucy Walker and Romilly Calvert. While Jess was unable to get past Walker this time, Eve gritted out a close 3 set match against Calvert to make the final for a fantastic silver medal.

Both boys pairing of Danny & Tom and Luke & George won through from their groups and came away from their semi finals with well-deserved bronze medals. In the girls event, Jess & Tamsin continued their recent winning form, moving past Calvert & Walker in the semi finals before dispatching the other Yorkshire pair of Arksey & Fowler in a one-sided final for yet another gold medal at a silver event. 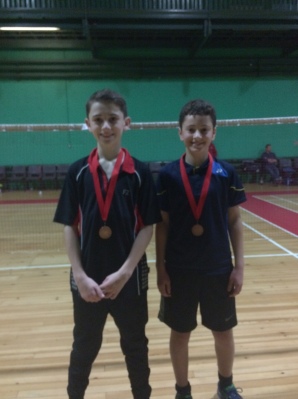 With the mixed doubles rounding off the day, Leicestershire continued to show their expertise in the doubles events with 3 of the 5 pairs featuring Leics players making it through to the quarter-finals. Tom & Tamsin defeated Eve and her Surrey partner to set up a semi-final against Rowan & Jess who had a bye through; Rowan & Jess won through after 2 very close games. As with the girls doubles, the final itself was a one-sided affair with Rowan & Jess claiming victory and the gold medal in 2 games against the #1 seeds 15-8 15-10.