The weekend of 12th and 13th November saw Leicestershire stage their annual U15 bronze and silver events. Team Leics players approached the weekend determined to put on a spectacular home performance and they certainly didn’t disappoint!

With the bronze event held on Saturday, Leicestershire were represented by Danny Beynon, Luke Hoult, Owen King, Ayush Panchal, Evie Pike and Grace Sherwin. The boys doubles turned out to be an all-Leicestershire affair with Luke and his partner George winning gold and Owen & Ayush taking silver after pushing their rivals to 17. 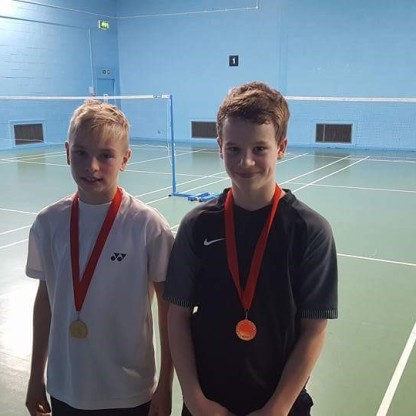 On to Sunday and the silver event saw the Team Leics ranks swell with the addition of Jess Allen, Tamsin Betts, Eve Durrance, Sophie Watson for the girls and Rowan Clark and Tom Paterson-Watts for the boys.

Despite some very tight matches in the girls event, only Sophie won through from her group, progressing to the semi finals with a good win over Catherine Wong before losing out to top seed Romilly Calvert but a well-earned bronze medal nonetheless.

Both Luke and Tom made the quarter finals for the boys; Tom unfortunately lost out in 3 to eventual finalist George Railton while Luke won through to the final by beating Daniel Atkins and Joseph Scott. In a high quality final which saw some superb badminton being played, Luke took victory and his second gold medal of the weekend in the 3rd and final game 15-11.

Moving onto the doubles and there was more success for Leicestershire in the boys event with Rowan & Luke winning through to the semi final where they unfortunately lost narrowly in 3 games to the second seeds Atkins & Kemp.

In the girls event, top seeds Jess & Tamsin and Eve & Sophie won their groups and while the #1 pair enjoyed a bye to the final, Eve & Sophie fought hard to also secure a place in the final, moving past second seeds Kirk & Wong in 3 very close games to set up another all Leicestershire final! While Eve & Sophie got the upper hand early on by taking the first game 15-11, Jess & Tamsin pulled level taking the second 15-10 and then holding on to their form to take the third game and the match 15-7. 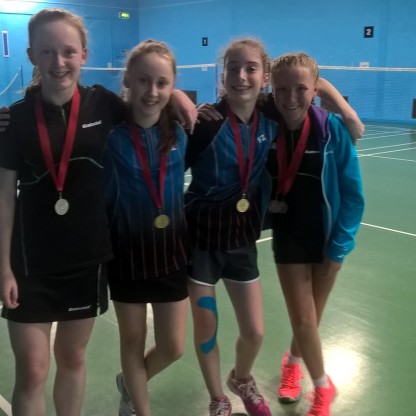 Across the 2 days, Leicestershire won 3 gold, 2 silver and 2 bronze medals over the 8 events played – a fantastic achievement by all the players!